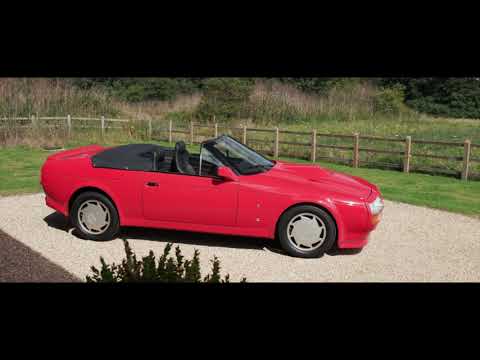 Engine Size 5.3 l
Mileage 59 miles
Previous Owners N/A
Bodystyle Convertible
Seats 2
Transmission Manual
Exterior Colour Gladiator Red
Interior Trim Black
Over 25 years after the collaboration between Aston Martin and Italian coachbuilders Zagato, which first produced the legendary DB4GT Zagato, a new union between both companies was forged in 1984. An agreement was struck, for Zagato to design and build a lighter and more aerodynamic version of Aston Martin’s fastest and most powerful production car. The result, unveiled at the 1985 Geneva motor show was destined to become yet another classic, from the fabled Italian design house.

With a 10% weight loss, a contemporary wind tunnel tested body shape featuring flush glass to be built on a shortened Aston Martin Vantage chassis. Fitted with Aston Martin’s fabled 430 bhp ‘X’ pack specification V8 engine and a 5-speed manual transmission, performance gains were to be a significant step up, on its Newport Pagnell built stablemate. A shock to traditionalists when viewed against the standard Aston Martin V8 models, the Zagato styling has stood the test of time and is undoubtedly, from the mid 80’s school of design. Reminiscent of contemporary Italian sports cars from Lancia and Alfa Romeo, the aluminium body and paired down nature of the V8 Zagato, has unsurprisingly since its introduction, delighted many enthusiast driver owners with the high performance offered.

Riding on the success of the pre-sold 50 limited production coupe’s, a convertible Volante evolution was announced in 1987 with a less powerful drive train and limited to a production run of 25 cars. Although, such was the demand that ultimately 37 examples were built, to customer orders.

We are therefore delighted to offer, with delivery mileage only, a superb example of one of the, 7 fully Vantage equipped Volante Zagato’s built. Unique, in never having been used on the public roads and in covering just 59 miles from new.

Finished in Gladiator Red with Black Connolly hides and matching hood, this unspoilt and ‘as delivered’ example, has been professionally attended to and stored in climate-controlled environments, since being delivered to its first owner in 1988.

An absolute time warp offering the car remains currently unregistered for the road. Although could be registered if requested. This exciting investment opportunity will be supplied fully prepared in our heritage workshops and comes, inclusive of its original build certificates and owners’ handbooks, keys, jack and tool roll.