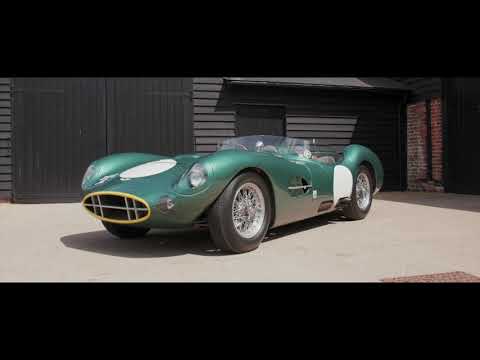 Built between 1988 and 1991, this highly detailed and professionally recreated DBR2 was the brainchild of the late John R Etheridge, an Aston Martin works Experimental Division engineer from 1956 onward and member of the race team.

Having wished for many years, since his time in the works racing department, to build for himself a DBR2, Etheridge’s opportunity came in 1990 when, with financial backing from F1 race entrants Safir Engineering, construction of this wonderful recreation started in the workshops of J. R. Etheridge Engineering Ltd, in Bushey Heath, London,

An original 1957 ‘Works’ DBR2, DBR2/2, maintained by Etheridge, was made available by the then owner, for detailed technical analysis and reverse engineering. A new tubular steel chassis, faithful to the original, was constructed and a new body buck made (included in the sale) enabling the aluminium body panels, to be fabricated. Built to the original configuration and keeping to the original design principles, including the use of Aston Martin parts, the completed car was first seen in public in 1991.

As with the original DBR2’s, the Tadek Marek designed Aston Martin DB4 engine, to 4.0 litre capacity, is fitted and carries a cylinder head identified with DP5057/2 stampings. DP5057 being the official engine project number for DBR2, the /2 denoting this cylinder head as being the second ‘project’ cylinder head, built up and fitted in 1957 to DBR2/2.

Commenting after inspecting the car in 1990, Ted Cutting, former Aston Martin Engineering Director 1949-1964, wrote to Etheridge, ‘you’ve done a great job. I’d go so far as to say that the car you’ve built, I’d have been proud to have done myself!’

The highly effective DBR2’s, of which only 2 were built, successfully raced in 1957 and 1958 as Works entries, with DBR2/1 and DBR2/2 being driven by Works drivers, Stirling Moss, Roy Salvadori, Tony Brooks and Paul Frere. With outright wins and new lap records set in Goodwood’s Sussex Trophy race, at Silverstone in the BRDC meeting and in the Empire Trophy race at Oulton Park during the ‘57 and ’58 seasons. Other races entered with the DBR2, included the Le Mans 24hrs in 1957. Retired from international sportscar racing by 1959, due to a new 3.0 litre engine size limit being imposed by the regulators, both original DBR/2’s were successfully campaigned by Carroll Shelby in the USA, before being sold off. Now in significant collectors’ hands, the two original DBR2’s are conservatively valued in excess of $20 million each.

This exceptional recreated DBR2, 1 of 1 built, was retained by Etheridge until 1995, when the car was sold to the late, racer and notable Aston Martin collector, Robert Leyba in Germany. Etheridge’s DBR2, forming part of Leyba’s sizeable collection, which at that time was the largest Aston Martin collection in Europe, was used occasionally on road events, before being sold at the inaugural Bonhams Aston Martin auction in 2000, achieving almost double the auctioneers estimate. The last owner, a Belgian collector, professionally stored and enjoyed the car occasionally, over the last 20 years.

UK road registered and carrying 1971 Aston Martin vehicle identity, this exceptional car is simply wonderful and fast to drive. Eligible for many historic road rally events and with some level of modification, could be made to comply with FIA HTP regulations, applicable for International historic racing. Finished in period Aston Martin racing green, the car is trimmed and finished in original and correct period materials and fitted with the correct period instrumentation, layout and switchgear.

Available for viewing now at our Hertfordshire showrooms.

Etheridge’s credentials need little introduction, save to say that after serving his years employed in Experimental Division and racing activities of Aston Martin, he in 1963, at the personal invitation of John Wyer, joined Ford Motor Co’s highly successful Advance Vehicle Operations team, to build and race the all-conquering Ford GT40’s. A heroic story well told, in 2019 Hollywood blockbuster, Ford v Ferrari. Wyer always opined that John was one of his finest racing mechanics.

At the end of Fords GT40 racing programme, Etheridge teamed up with established race car manufacturer Safir Engineering and John Wyer’s automotive business in acquiring from the Ford Motor Co in Dearborn, a licence to build and further run 40 Ford GT40 MkV’s, now in collections worldwide.

In 1968 he set up his own company specialising in Aston Martins, Ferrari’s and the Ford GT40. His workshops always looked more akin to hospital operating theatres than any garage – such were his standards.

A limited number of spares are available, including a new DB4GT type ‘Twin Plug’ cylinder head. The original wood ‘body buck’, used to construct this car, is included with the sale.