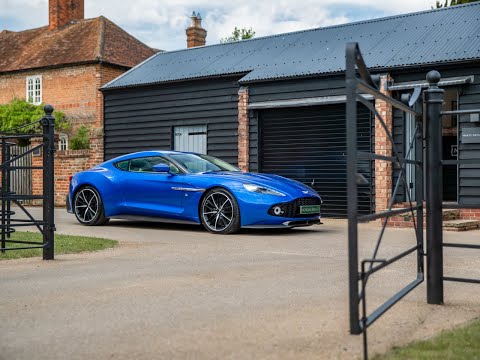 We are delighted to offer this sensational 2017 Vanquish Zagato, finished in Cobalt Blue and presented in ‘as new’ condition, as befits the mileage of just 612 miles.

Unveiled to great acclaim at the prestigious Concorso d’Eleganza Villa d’Este in May 2016, the Vanquish Zagato was the then latest creation from the long-standing partnership with the Italian design-house, Zagato. A strictly limited production run of 99 cars, for worldwide production, were built at Aston Martin’s production facility in Gaydon, England with just 32 for the UK RHD market.

The Vanquish Zagato was based upon Aston Martin’s highly successful Vanquish model that utilised their VH chassis architecture, mated with a 6.0litre V12 engine, in this model tuned to produce 595bhp, capable of propelling the car to a 0-60mph time of 3.5sec. Bodied entirely in Carbon Fibre, the Vanquish Zagato incorporates many of the design houses signature styling cues such as the ‘double bubble’ roof and large front grille, built with the exquisite ‘Z’ pattern. At the rear, the bladed LED lights provide a futuristic look.

Not only sublime to look at, the Vanquish Zagato is a real thrill to drive, courtesy of; the most powerful engine available, the lighter weight, as a result of the extensive use of carbon fibre, the 8-speed Touchtronic III ZF gearbox and incredible stopping power from its Carbon Ceramic brakes.

Benefitting from annual servicing at Aston Martin in Newport Pagnell, this car is in immaculate condition throughout and is supplied with all keys and owner’s manual, original umbrella and battery conditioner and bespoke car cover.

When considering an original purchase price of £525,000 + this car now represents superb value for what is likely to become a highly collectible and sought-after model, produced at the very end of the successful 1st generation of production at the Gaydon factory, before the introduction of the 2nd century Aston Martins.