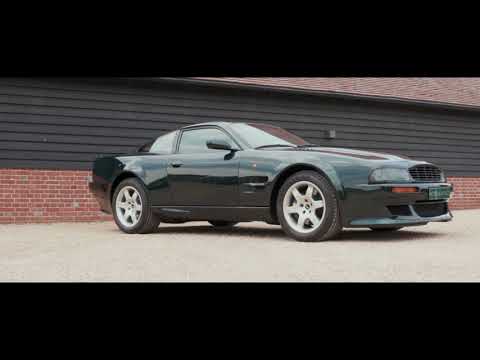 Launched in October 1992, the supercharged V8 Vantage entered production in 1993 answering the call for more power to propel the then current Virage. Extensively re-engineered from the chassis up, the only common components were the doors and roof. With a new architecture chassis, a de-dion rear axle, heavily revised front suspension, brakes and torque tube transmissions to facilitate the twin supercharged 550 bhp, V8 engine. The sum of the parts, created a wholly different car.

With 233 Vantages built, of which just 97 were in LHD configuration, these distinguished and commanding performance cars have firmly established themselves, not only as sought-after classics but as the very last product of the coach-built era. Designed, production engineered and constructed by Aston Martins artisans, craftsmen and engineers, at the now closed Newport Pagnell factory.

This late production example, Chassis 700216, is finished in Pentland Green with Tan hides, piped Forest Green, 1 of only 2 cars built in this colour combination. Supplied new to Germany in September 1999 and used sparingly by its three former keepers. Maintained by Aston Martin agents and respected marque specialists, including its most recent service at Aston Martin Works, this car is in exceptional condition throughout.

Prepared and serviced in our workshops, this magnificent example of the twin Supercharged Vantage, is supplied with German registration papers, the original Owners handbook, spare keys and service records, build data and 12 months warranty.

Available for viewing and demonstration at our Hertfordshire showrooms now.

Make an Enquiry
Reserve Now
Call 0208 7418822
Call 0208 7418822
View on a map and get directions to Nicholas Mee >
Back
Book A Service
Compare Saved Vehicles
Top
Close
Your Cookie Settings
Select your cookie settings
Strictly Necessary Strictly Necessary cookies are essential to let you move around the website and use its features, such as accessing secure areas, shopping baskets and online billing. These cookies allow our website to provide services at your request.
Functional Functionality cookies are used to remember the choices you make, e.g. your user name, log in details and language preferences. They also remember any customisations you make to the website to give you enhanced, more personal features.
Targeting Targeting cookies collect information about your browsing habits to deliver adverts which are more relevant to you and your interests. They also measure the effectiveness of advertising campaigns.
Save Settings
Cancel Changes

Your settings will take affect when you refresh the page or move to a new page. Find out more about cookies