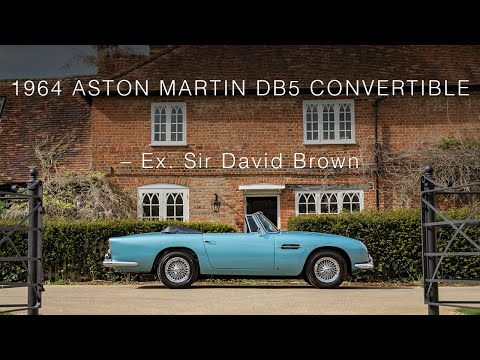 Ordered, built and delivered in January 1964 to the late chairman and champion of Aston Martin Lagonda Ltd, Sir David Brown. Build details confirm, chassis DB5C/1273/R, to have been originally finished in Caribbean Pearl with Navy Blue hides and matching hood, as presented today. Specified with the then new type, 5 speed ZF gearbox, a Power Lock rear axle and equipped with chromed wire wheels and Motorola radio.

Beloved by notable names in period, including royalty and stars of the silver screen, this particularly attractively specified DB5 Convertible, is believed to have been owned for some 3 years by Sir David Brown, before finding its way into the ownership of former Aston Martin DB4 GT owner and garage proprietor, John Wilkinson of Wales. During Wilkinson’s ownership, maintenance was carried out at Aston Martin in Newport Pagnell, who’s records confirm a replacement engine block being installed along with a newly stamped manufacturers identity plate applied to the car, simultaneously in 1969.

Last sold by Nicholas Mee & Co in 1994, this superb driving DB5 Convertible, 1 of just 123 built, has since been enjoyed across Europe, at various Concours events and benefitted from a total overhaul in 2014. Works at that time included rebuilds to the engine, suspension, gearbox, brakes and rear axle. A bare metal re-paint and complete re-trim of the interior in Connolly hides, along with a new hood covering, completed the major restorative works.

In excellent and highly useable condition all round, this rare matching numbers and tastefully specified DB5 Convertible, is offered for sale for the first time, after 28 years of ownership. Much cherished and well maintained, this exemplary example of the beautifully proportioned DB5 C, is ready to be enjoyed by its next custodian on tours or shown in concours event.