The Lagonda Taraf – the name implies 'ultimate luxury' in Arabic – was revealed to a select number of VIP customers in a private room at the 2015 Geneva International Motor Show. It had already been shown to a few chosen Middle East clients the previous November, a customer base with great enthusiasm for the marque, one which always held the futuristic 1980s William Towns designed four-door in high regard.

The Taraf’s modern design was executed by a team at Aston Martin’s Gaydon headquarters led by Marek Reichman. They used the company’s flexible VH architecture as a foundation on which to create an elegant four-door: a luxury hi-performance supersaloon in the grand manner, capable of over 190mph thanks to its powerful 540bhp, 5.9-litre Aston Martin V12 engine. Like its coupé relations, the Taraf is clothed with carbonfibre-reinforced body panels for strength and lightness. The latest car’s sophisticated lines from Reichman’s team made saloons from Rolls-Royce, Bentley and Mercedes-Maybach seem almost staid by comparison. On the open road, the Taraf’s overall performance would have left them wanting.

Aston Martin’s initial intention with the Taraf was to solely serve the Middle Eastern market, but such was the VIP customers’ enthusiastic reception in Geneva that the company decided to make it available worldwide. At launch, it was priced at $1million in North America and €1million in Europe. All prices excluded local taxes and duties. Aston Martin Lagonda Ltd assured potential customers that the new car would be limited in production; no more than 200 would be made. In the event, most sources state fewer than half that number were built and sold.

The opportunities to own a Taraf are limited, particularly in the United Kingdom. Until now. Here at Nicholas Mee & Co we have an immaculate example available at our base in Hertfordshire, close to Central London and the UK motorway network. The left-hand-drive car was built in 2016 and is finished in a stunning Onyx Black with a Winter Wheat and Obsidian Black, Caithness-grade hide interior. The lucky driver and three passengers can listen to music via the Bang & Olufsen BeoSound for Aston Martin 1,000W audio system or enjoy the unique melody of the smooth and powerful V12 engine. Those in the roomy rear compartment have the opportunity of watching their favourite movies on high-quality rear screens. The ultra-rare car has covered only 150km from new.

“I remember the impact the William Towns Lagondas had in the 1970s and ’80s,” says Nick, who ran AML’s sales operation in London’s West End in those days.

“The original Towns-designed ‘Wedge’-shaped Lagonda generated amazing publicity and there was a three-year waiting list for the futuristic car. When first shown to the press in 1977 it was, literally, headline news in the national daily newspapers. Those cars proved a great sales success for Aston Martin Lagonda at a crucial time. There’s no doubt that the Taraf embodies the overall appeal of the older car, while being a modern-day product from Aston Martin’s Gaydon studios: fast, beautifully built and with a restrained and timeless appeal. Collectors of modern classics looking for exclusivity cannot ignore the rarity factor and that the Taraf will be the last petrol-engined Lagonda.

“People ask me to define a ‘future classic’. Well, the Lagonda Taraf is a pretty good place to start." 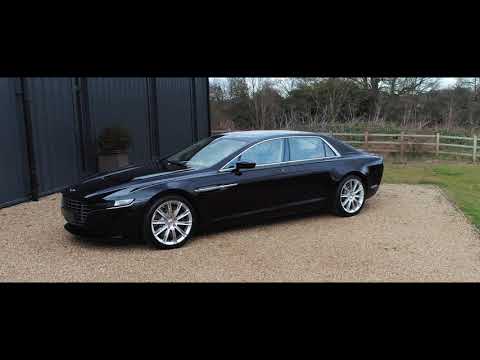