Elegantly finished in Dubonnet with Fawn hides and matching hood, the DB4 Convertible we are privileged to offer, has a delightful history and been the recipient of a ground up restoration, completed in 2018, to the exquisite standards shown.

Launched in 1961, just 70 examples of the DB4 convertible were manufactured in two batches, the first 30 on Series 4 chassis and the remaining 40 on Series 5 chassis. Chassis 1065/R, a series 4 car, was completed and delivered in its current colour pallet during 1962, to its first Kent based owner, via Aston Martin agents Brooklands of Bond Street. London.

Changing hands in 1967 to a Surrey based enthusiast, who greatly enjoyed the car for 4 years updating to a DBS V8 in 1971. The next owner, a UK resident, emigrated and relocated the car to Australia, where it remained before being subsequently re-imported to the UK, in 1989. By 2010, 1065/R was spotted in an advertisement, by the very same Surrey based enthusiast who had owned the car between 1967 and 1970. Having missed its charms and with family encouragement, the same gentleman re-purchased the car and subsequently submitted it to renowned Aston Martin specialists, for total restoration.​

The superbly executed restoration, completed between 2014 – 18, encompassed all aspects of the chassis and body, a full mechanical rebuild including to the engine and transmission, all brakes and suspension rebuilt, and electrics refurbished. As well as a total repaint, a complete retrim in Connolly hides and fitment of a new hood, replating of all chrome work took place. The completed restoration, fully detailed in the restorer’s invoices, totalled over £300k of expenditure, all of which is contained within the comprehensive leather-bound history file which accompanies the car.

A matching numbers example, during the restoration process the engine was built to 4.2 litre and 280 bhp specifications, as confirmed by the engine dyno sheet provided in the history folder and the transmission upgraded with the period optional overdrive transmission, a combination which gives the bonus of superb touring capability and enhanced performance.

Presented in outstanding condition, this exceptional example of the rare, elegant and highly coveted DB4 Convertible, is available for viewing at our Hertfordshire showrooms now.​ 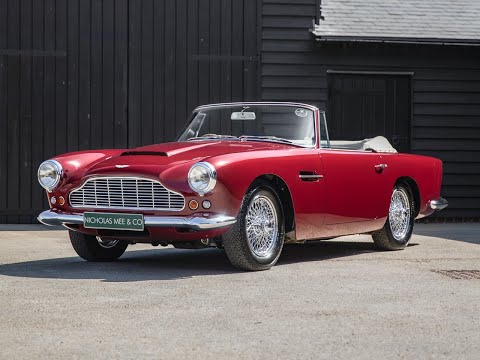