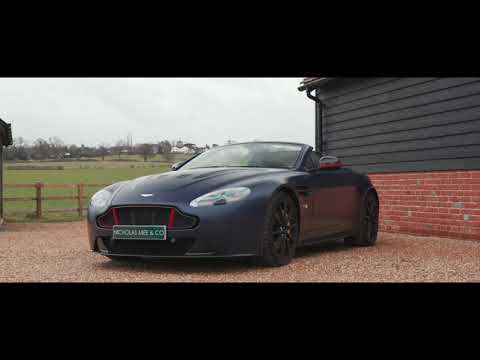 Ticking the boxes of the modern era collector’s considerations, this sensational V12 Vantage S Roadster with manual transmission, could hardly have been anything other than perfect, when signed off for production, quality checked and purchased by Dr. Andy Palmer, President and CEO of Aston Martin in 2016.

1 of just 36 examples of the V12 Vantage S Roadster built in Right-Hand Drive, equipped with 7-speed manual transmission. Uniquely finished in Q - Match to Sample Satin Mariana Blue, with a black exterior hood, over Obsidian Black hides with Spicy Red contrast stitching, the specification, developed by Aston Martin’s ‘Q’ division for Dr Palmer, is highly detailed and as comprehensive as one might expect, for the first owner.

With routine servicing and maintenance carried out annually at Aston Martin main agents, including its last service in September 2020 and having covered just 10,600 miles in the hands of its two owners, this car is in superb condition throughout with only the lightest evidence of use, courtesy of the protection provided by the full body PPF applied. Supplied with a history file, including a personalised letter confirming Dr Palmer’s ownership, owner’s manual and spare keys and a bespoke, custom fit car cover.

This rare and exhilarating convertible perfectly represents the ending of an era of Aston Martin V12 engined cars, specifically with manual transmission. Never to be built again, with the advent of turbo charged, hybrid and ultimately electrically powered cars upon us, the opportunities to acquire an example of this model, with such strong credentials, grow less as time passes.

Make an Enquiry
Reserve Now
Call 0208 7418822
Call 0208 7418822
View on a map and get directions to Nicholas Mee >
Back
Book A Service
Compare Saved Vehicles
Top
Close
Your Cookie Settings
Select your cookie settings
Strictly Necessary Strictly Necessary cookies are essential to let you move around the website and use its features, such as accessing secure areas, shopping baskets and online billing. These cookies allow our website to provide services at your request.
Functional Functionality cookies are used to remember the choices you make, e.g. your user name, log in details and language preferences. They also remember any customisations you make to the website to give you enhanced, more personal features.
Targeting Targeting cookies collect information about your browsing habits to deliver adverts which are more relevant to you and your interests. They also measure the effectiveness of advertising campaigns.
Save Settings
Cancel Changes

Your settings will take affect when you refresh the page or move to a new page. Find out more about cookies